Master of the Bed 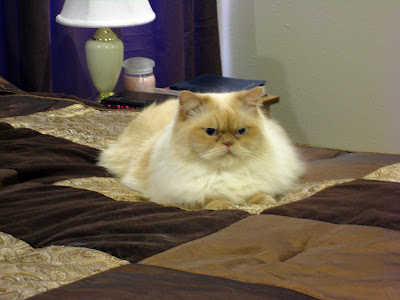 Rocky is a Flamepoint Himalayan and he also prefers to sleep on his master bed too. Sometimes we let our pet humans up here. Rocky matches the colors. It also puts us at a good brushing level and we are more likely to get attention up here. 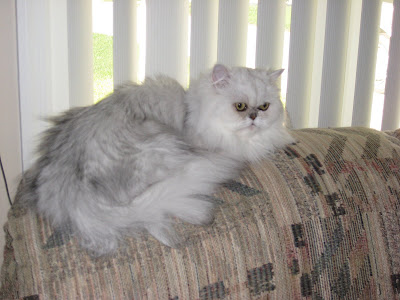 Its been raining a lot and Myst still feels like its his sworn duty to hide under a certain part of the sofa. One spell of rain hit suddenly and Myst jumped off the monitor and crouched very low to the ground and ran as fast as he could while crouching super low. We all watched him, trying hard not to laugh. We did not see him again for hours.


Rocky is more into watching Lucky and Ashton act crazy over the laser light. He just had a 30 minute brushing session so he is all relaxed right now. 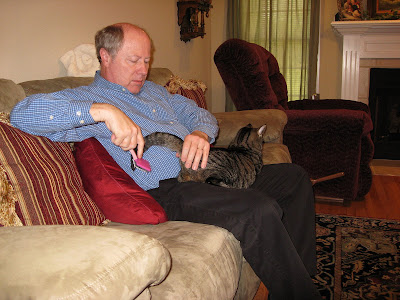 Visiting Rocky and Lucky. They both got a good brushing when my pets visited them. 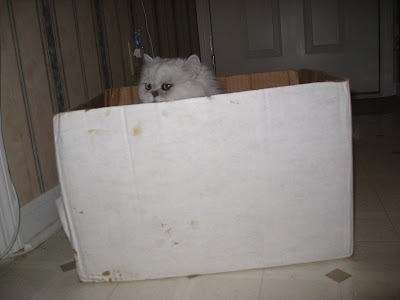 All Myst did was just sit there. I guess that is all he wanted to do as you saw in the movie a few days ago. Looks like a good fort to me, though! 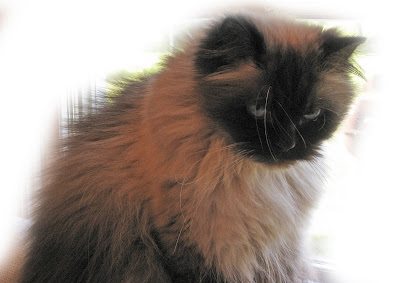 Terry is unhappy with me cause I keep eating any fuzzy bits or fur I come across on the floor. She says there are better things to eat than fuzz. I agree, but it just seems like the thing to do. 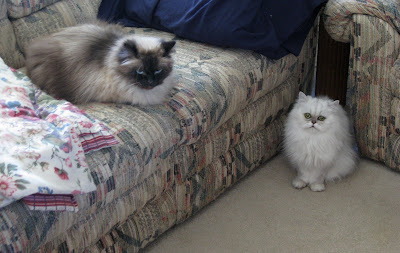 We are just sitting around. We have no intentions to chase each other. See the innocent looks on our faces? Myst just happened to want to sit right there. It's a nice place to sit - right there in that spot. Honest!


Myst defends the home from the evil blue crinkly paper and teaches it a lesson. He has pretty big paws for being a small cat. 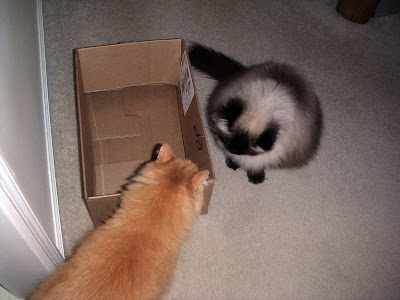 Sometimes a box smells peculiar and we need to sniff it over before jumping in, then we have to decide who gets to jump in first. I never argue with Dandelion, though.

My Turn in the Box 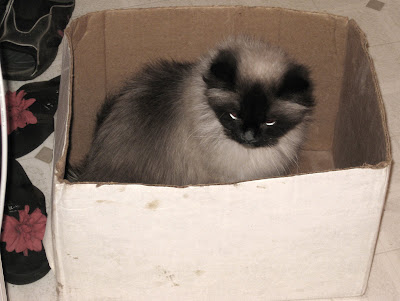 I got to spend time in the box too/ Dandelion could have, but I think he was too sleepy.


I walked around the corner, and much to my pleasure and surprise, a box that had been used outside was sitting in the house! It smelled GREAT! It was perfect for us cats. Myst was already sitting in it.

Boxes have some kind of magnetic pull on cats. No matter the size of the box, we are compelled to sit in them, even if there is no other reason. 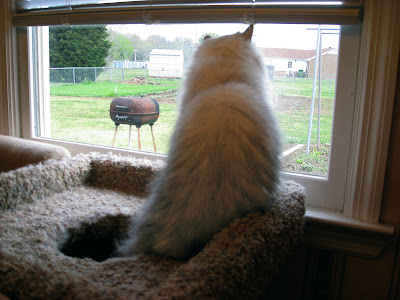 I love mornings. My humans wake up and brush me first thing. I get an extra brushing because I have to take a pill every day and this makes taking the pill come with a reward so I do not mind doing it so much.

Then they open the window blinds and we can watch birds fly around, daring us to catch them. Just wait. If any flying thing gets into the house, it will not last long if we can help it!


Not much going on here. Terry came at me with a clicking box in movie mode so I was SURE not to move a muscle. Well, almost not a muscle. Then Myst came by to see what all the nonaction was about and I left. Lots of nothing here but you can see how much bigger I am than Myst even though he is the boss.


Myst wanted Terry to follow him. He usually leads her to the sink and haves her pick him up and set him on the countertop and asks that she turn on the water and fill the sink with it. He has her well trained though he was getting bored of trying to talk her into following him because all she was doing was pointing a clicking box at him. 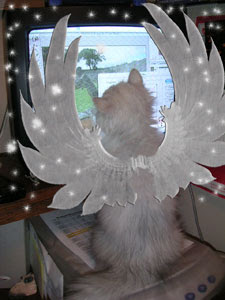 When Myst was a kitten, Terry thought it would be fun to practice Photoshop with his photo. He always was a TV addict, though I see no special charm in a TV.

I WAS Bored, but Not Anymore 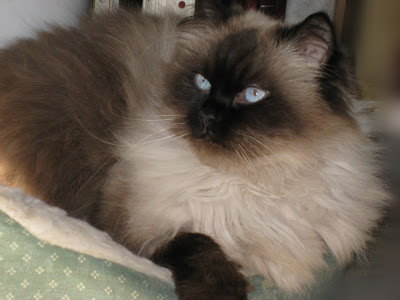 So I was bored. I walked up and down the halls, crying loudly. Yes, I had been brushed twice already and well petted but I like constant entertainment.

Myst had been asleep on the monitor when I started walking down the hall, crying out my boredom. His ears shot up, his eyes opened and he began to watch me.

I kept up my rukus (as Terry calls it) and then POOF! Myst had appeared like magic and pounced on me! POW! Off we ran.

(I was no longer bored as Myst had decided to teach me a lesson, that meowing up and the down the hall will get him to chase me.) 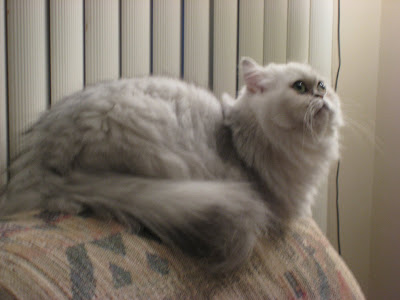 Ever on the alert for flying snacks.

Sun Before the Storm 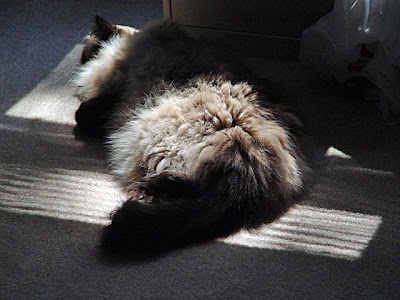 It was sunny before the rains and storms moved in this afternoon. Tornado warning sirens went off and the wind blew a lot. Terry says we live in a valley with hills around us which may have kept us from the worst of the weather. Unlike the other cats here, I want my pet humans around in storms so I can be comforted and petted and loved.


Dandelion goes outside now and then. There are dogs in every yard that surrounds ours but they do not bother Dandelion who can not hear them. He is just happy to chew the plants outside and get a breath of fresh air. Well I like the fresh air and plants are ok, but not if I have to go outside to get to them, forget it! Going outside usually means I am off to the vet's. 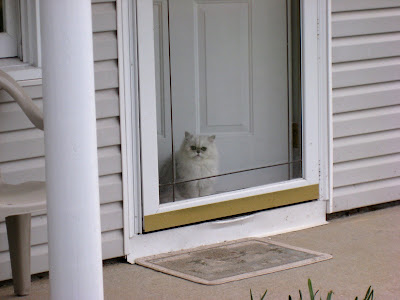 Terry was attacked by a bird and we are keeping a watch out for them. Just try and get us, birds! 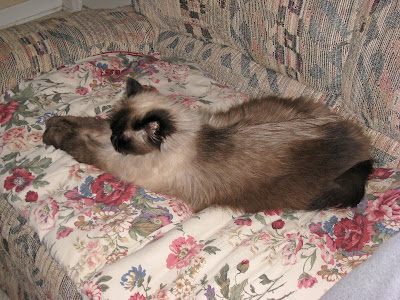 It was a great day, being warmer and finding many good places to sleep including the fresh laundry out of the dryer and placed on the bed. I was sure to take advantage of my human's kindness is preparing a warm bed for me. This spot is right by the front door, so I can meow and get my twice daily brushing when my humans come home. I am ready! 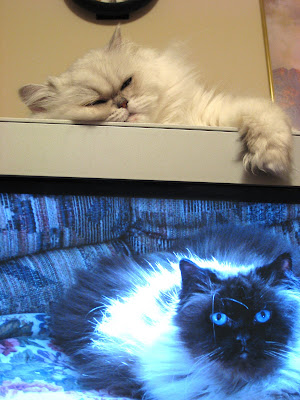 Hope you do not get too sick of the these "cat-on-the-monitor" pictures. Terry takes a lot of them because she is working here and Myst is a handy subject. She says we are teaching her all about relaxation.

I say, Myst has a racket going. Lots of ear scratches and a heated bed. This is Myst before the rain started yesterday. He really luxuriates up there and he gets ear scratches from Terry cause she says her computer is slow and it takes time to load anything so she might as well get the purring going.

Of course, as soon as the rain started, he jumped to alert and dashed under his deep dark place in the sofa. I was not too happy at losing my playmate and I went around the house, pawing and scratching and making playful motions so that he might come out and chase me.

Nothing worked. When it rains, nobody sees Myst until long after it stops. Sigh. 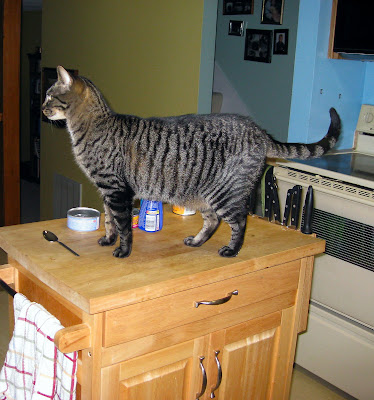 Terry comes home smelling of this house and I do not let her touch me until I sniff her over. She took this picture of Emmie on the counter, jumping where she is not supposed to be, like I do. Rules? What are those? 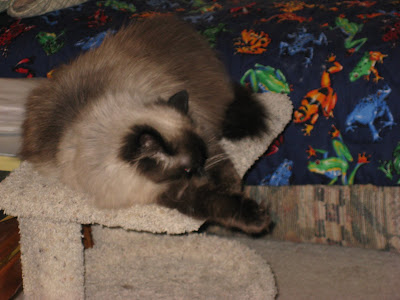 Terry and her friend talk about their masters. Terry says we are quiet, laid back cats compared to her friends young adult very hyper cats. Quiet is not a word normally used to describe me, but I suppose we all do more talking and less running than others.

Why Would Anyone Want to Go "Out There?" 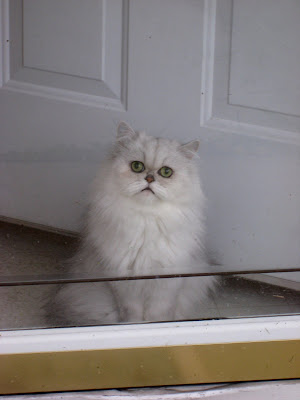 Myst and I do not understand why anyone would want to go "out there" in that big strange room. Dandelion says he understands perfectly and would love to go out there, but I don't get it. They can hold the door wide open and we would not go out there. I do hate to see my humans out there. It just seems strange and I meow to them to come back.