Our Sympathy to Mia's Family

So sorry for the loss of Mia and love she brought to their family. Purrs and hugs from Muddy, Myst and Dandelion 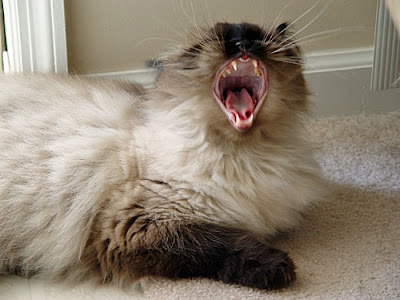 Happy Halloween to everyone out there. Yep, this is just a pic of me yawning, but I am more than ready for some good treats! 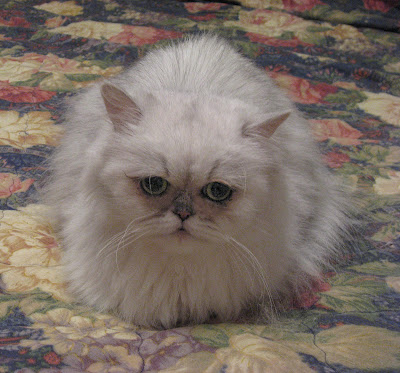 The Mighty Dog-Chasing Myst now sits on the king-sized bed, resting in assurance that he can keep all dogs out of the house. He growled at one yesterday who was peeking in the door and though that dog was friendly and curious the whole time, the dog did leave, thus leaving Myst with a sense of accomplishment in defending our home. I feel safer now. 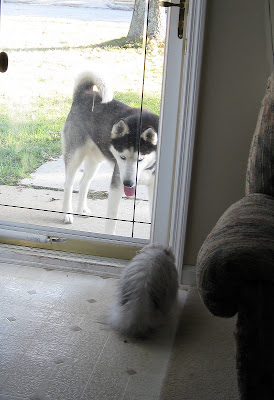 Terry and I were in another room when we heard a very very loud scream, one neither of us had heard before. We both tore out of the room to see what was going on and then we saw it. Myst was ALL PUFFED UP and SCREAMING very very angrily at the neighbor's dog who had escaped his fence and was looking at him through the storm door. (This photo doesn't show the initial screeched up look or the puff tail too well, but it was there when we first ran into the room.)

We had never seen such a sight before: Myst with a totally frizzed out tail! I stayed a good 10 feet away and jumped up on the furniture so I could see all of the action but being able to flee at a moment's notice.

Terry was in shock. She could not believe this loud, angry sound was coming from such a small cat who normally has a low monotone meow and hides in fear when it rains outside. Well, I was in shock, too, but I knew Myst was defending our house and that he was very very angry.

Terry went outside and put Zeus back in his fence. Myst walked around the house with a puff tail for a long time. He was pretty proud of himself because that dog never came back and he knew he had scared it. 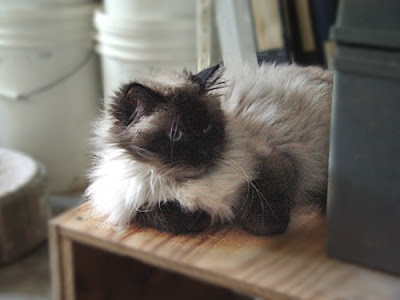 This is me after I just woke up and before I was brushed. I think I should be brushed at least a dozen times a day, but its hard getting my pet humans to understand this. They do it only twice a day, but I work on them. One day, I might have them trained better. 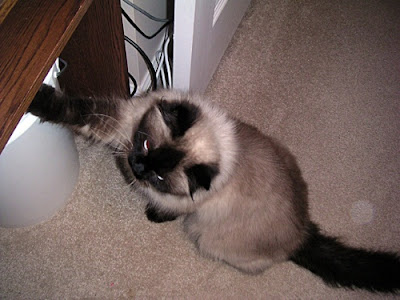 It's my job to inspect everything that comes into the house or appears to be hidden. Anything good in here? 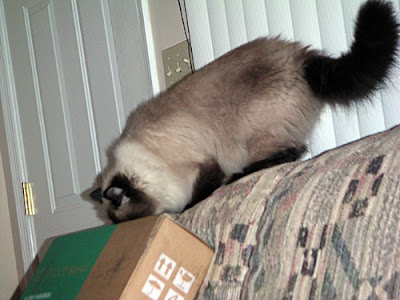 I love this time of year because more boxes arrive! I just wish this one were laying flat so I could sit on it.

Adore and Honor the Cat 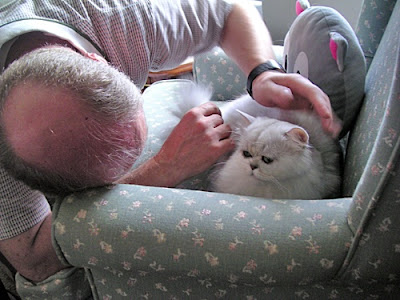 Myst is being adored as all cats should be. He is royal and he knows it.

Don't ask ME to adore him, though. I would rather chase him -- and I did that a LOT this morning up and down the hall!

The Mail is Here 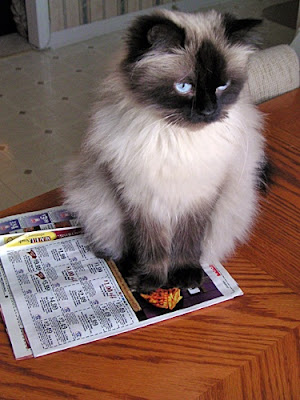 Yay! The mail came. I am happily sitting on it. I love to sit on new smooth stuff such as this mail and the newspaper. I think I like it because it smells from outside the house - curious smells. 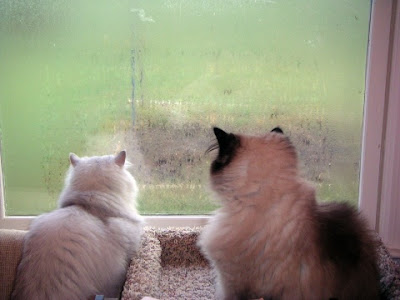 Myst was stalking something. The rest of the family did not know what what going on until they were eating breakfast and suddenly, a baby cricket hops madly into the kitchen because he was being chased by Myst.

Myst was right on his trail, then the baby cricket jumped into the water bowl! It was fun watching him kick around for a while until the humans threw the water out of the door, letting the cricket get away. Humpf! I wanted to watch him kick around some more. That was a LOT more fun than trying to see out of this foggy window later. 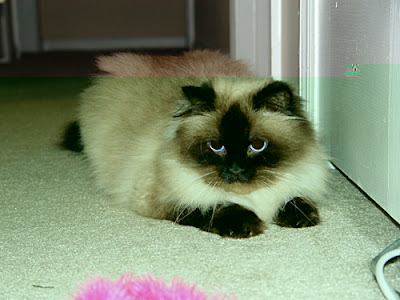 Yay! We can post photos again! Thanks Scout and Henry Helton, for your comments.

I've been super sassy today. First, I stretched on the wall, stretching out my claws in the sassiest, challenging way possible. Yup, Myst was watching and he took it for the challenge that it was. Next thing I know he is trying to pounce on ME! I showed him because I pounced on him before he could pounce on me, then we both took off in a mad chase down the hall and Terry did not see us again for a while. Life is good.

I wanted to post a picture today, but Blogger seems stubborn, so here is my entry without a photo for now.

All three of us cats are REALLY enjoying looking out of windows. It is windy and all kinds of interesting things blow by. 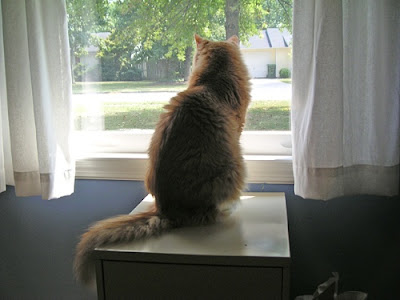 Dandelion lived his first year as an outdoor cat and I think he misses it sometimes. Myst and I LIKE being indoors and it is pretty safe to open the doors to the outside around us, but the family has to be careful with Dandelion who does not realize the dangers of outside. 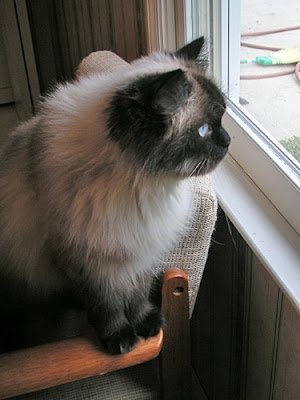 If there is a window and any way to possibly get to it, I will find it.

Terry and Rocky's pet, Jenny, are not happy. They missed the cat show. Normally it runs two days, but this year it was just one day and they did not know. Terry is looking for a good top-quality reminder program so things like this will not happen again.

There are lots of good buglies out here. I want this door open ALL THE TIME. That way, I can watch bugs even in the middle of the night.

My humans are so dense! I keep telling them to open the door and they just hold clicking boxes at me. Sigh.
Posted by Myst (Muddy's Brother) at 8:54 AM 3 comments: 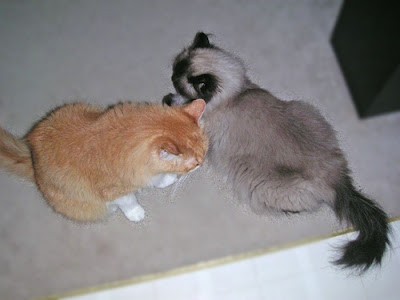 Here we are, doing our daily inspection of the house (and each other). Myst is in another room, exploring. I, especially, have to inspect the entire house every day and anything that comes inside. Terry will even open the refrigerator and let me look (she is careful to watch so the door does not get shut on me). It's not so fun to stare out the front door anymore. Even though I am a Himalayan with thick fur, I am NOT a fan of cold drafty air. Could someone point me to the warmest place in the house, please?

Leaky Faucets are More Fun Than This One 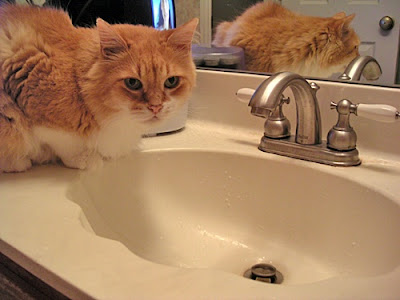 Will someone please hurry and turn on the faucet? Frankly, I can't understand why we do not have more leaky and dripping faucets around here. They are waaaay more fun! I am with Dandelion on this one.

Come On In, Bugs! 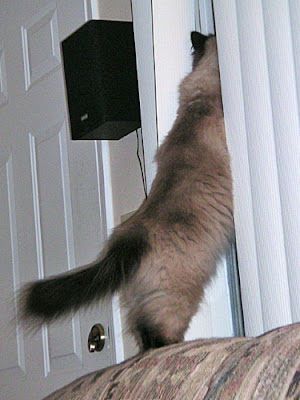 There's bugs out there. Sometimes I hear them hit the window. I have to figure out some way to let them in the house. I am working on it. 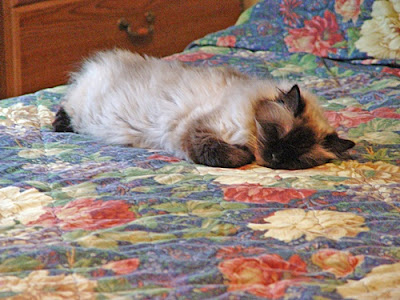 Myst has been very playful lately, chasing me all over the place and pouncing at unexpected moments. He has worn me out. 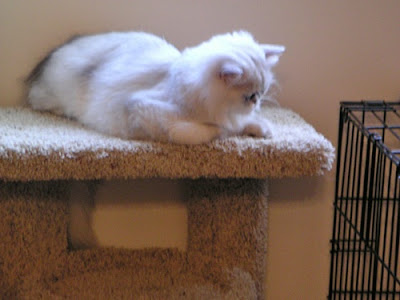 Myst has gotten more demanding, crying for doors to be opened, getting bored more easily and nagging his humans a lot. I think it is just because he is healthier now and is more aware of the world around him. It's a good sign and well, our humans need the constant exercise of opening doors and playing with us. It keeps them alert and happy.

Besides, I think Myst needs more pouncing on, too, and I am good at that. 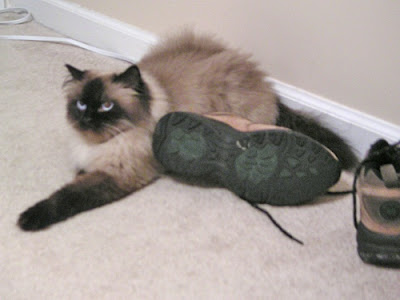 Shoes are fun things to sit around. With the gardeners in my family, they can smell of grass and soil, which is a pretty good smell, actually.

I spent a large part of the morning looking at different templates, but this one is easy to read and I kept coming back to it.