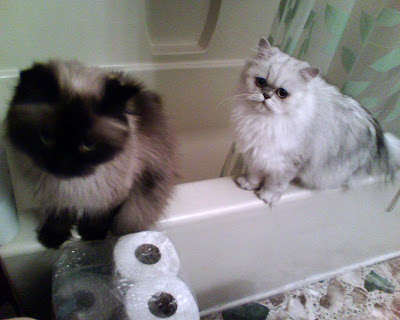 Terry took a pic of us from her cell phone. Ahem. Actually we were wanting a closer look at it, whatever a G1 phone means. I hope it means it comes with cat treats. 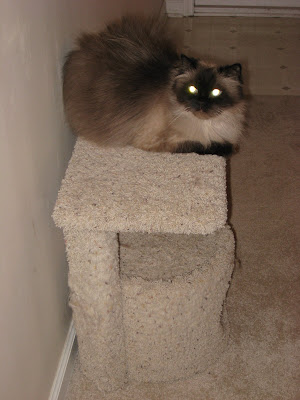 Hahahaha! My humans woke an hour late. You should have seen them jumping and running about and muttering things like "Who forgot to set the alarm?" I never had so much fun watching them run up and down the hall and exclaiming "I'm going to be late!" and "Hurry! Hurry!"

And they think cats are amusing! Ha, humans are MUCH funnier than we cats.

(The only thing is they forgot to give me my special treat, humpf! At least I have my regular food until they get home.)

Today is a Good Day for Sleeping 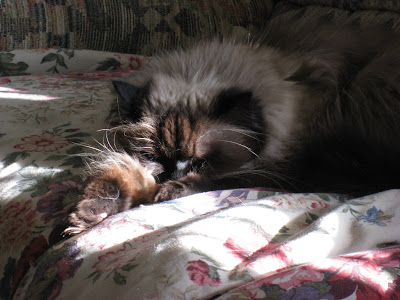 Every day is, for that matter. May all of you get some good sleep today.

Leaving the Boxes Out for a Few Days 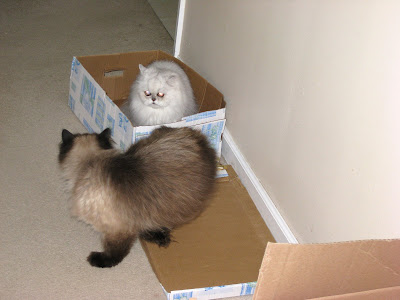 Terry says we are having so much fun that they will leave the boxes out for a few days. I have my pet humans well trained to keep us happy. 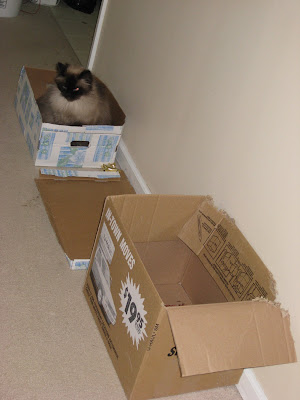 Just hanging around, sitting in a box. Soon, I will sit in the other box. Then maybe I will go back and sit in the first box and Myst will join me.

Myst Thinks He is King, Now 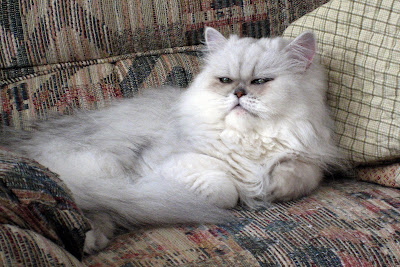 What you see here is a very smug and contented Myst. He thinks he is some kind of mighty warrior because a little black moth flew into the house.

Myst was sleeping on the monitor, as usual. Then the moth flew near and teased him. Myst jumped to the alert and tracked the moth's movements closely. Terry was looking around the room, hoping it was not a wasp or anything.

Suddenly, the moth swooped close. Myst leaped up and used both paws and grabbed the moth and ate it before it could get away. Terry said it was awesome. Humpf. I never got a chance at it!

Myst and a Comb 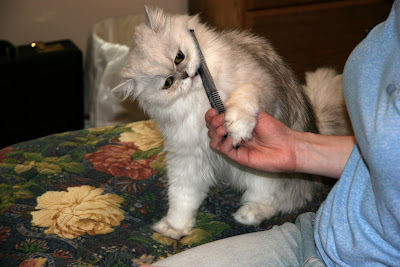 Myst loves being combed and he loves whacking and chewing on the comb in a show of dominance.

Happy Easter (If you catch any bunnies, let us know) 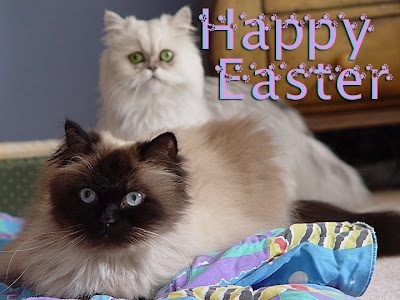 From Our House to Yours, HAPPY EASTER!

(Still keeping an eye out for the Easter Bunny....) 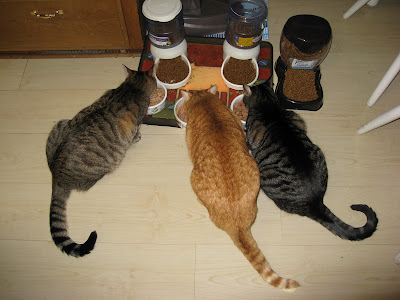 My pet human, Terry, is watching these cats while their humans go on something called a "vacation."

She comes home smelling like these cats and I have to sniff her over thoroughly before I let her touch me, even if she washes her hands first. They look like cute cats, though. 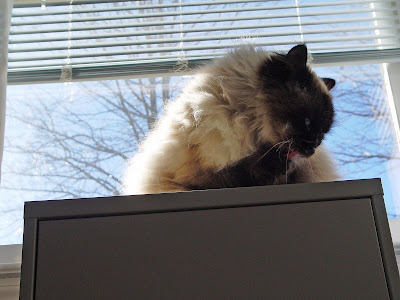 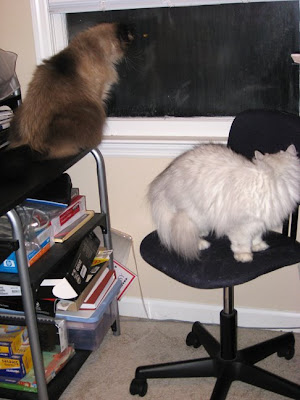 Myat and I are trying to see what all the noise is about. Birds are chirping like crazy outside but its still dark. Terry wonders if we can see anything this early in the morning.

She says it sure sounds like Spring is here judging from the birds outside, or flying desserts as I call them.