Christmas in July - I don't get it but we like that swirling stuff. 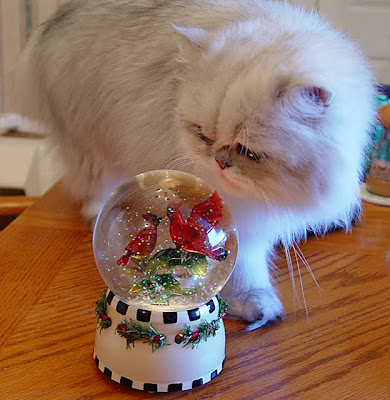 How did those birds get in there?! I never got Christmas in July either. Maybe it's supposed to remind you that it won't always be so hot out!

At least the snow is inside there.

Hi, its good to know something about snowglobes. I only literally read this the other day so I should tell you. They contain a little antifreeze. If it were to smash on the ground and splash your cat and he/she were to lick it off, or just lick it from the floor it would likely be fatal. I just the other day read about somebody's cat who died like this dayys after it happened. Antifreeze is tasty to cats and makes them a bit drunk too. Im sorry to be such a downer but I was in tears after the story i read and the lady who wrote it is on a mission to let people know about this so I should mention it I suppose albeit that I am a complete stranger. I had no idea such a tiny amout could be so lethal and that it takes days. When they realised what it was they could not do anything to stop it. Poor lady. I like your blog. I am just a lurker, - infact this would be the first comment I ever made :)